With this blog I want to introduce our customer Roboteam and its product ROCU-7, which stands for Ruggedized Operator Control Unit. This unmanned robot classifies a handheld with a 7-inch monitor, that supports military and civilian project.

The specialists in the successful US television series “The A-Team” were the inspiration when Yosi Wolf and Elad Levy founded their company, Roboteam, in Israel in 2010. Their plan was to develop a specialized task force of unmanned robots in order to support soldiers in the field, and also to simplify the work of governments and civil defense authorities. But in this case, it is an A-Team made of electronics and iron. Their objective was to develop modern unmanned systems that are easy to operate no matter how difficult the setting and that protect the lives of soldiers and members of the emergency services. From the very beginning, the development teams stressed the importance of an ergonomic product design and human-machine interfaces that conform to industrial standards. The quality standards Roboteam sets are also a challenge for its suppliers.

Around three years ago, the developer team headed by Mark Vaynberg was looking for a small, flexible CPU that could easily be integrated into the new ROCU-7 control unit. They found what they were looking for at Kontron. Mark Vaynberg, who plays a major role in product development as the head of the Research and Development Department at Roboteam, had already worked with Kontron solutions and had only good experiences with the components. 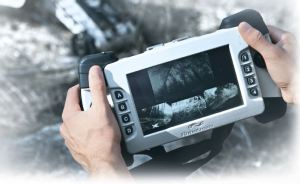 Kontron developed the COM Express® mini module in order to implement power-saving computer-on-modules with greater x86 performance on a credit card-sized footprint (55 x 84 mm). “The ultra-compact module with COM Express® pin-out type 10 satisfied all the requirements with regard to functionality and performance that we expected from an ultra-small embedded solution for our ROCU-7 control unit,” Vaynberg says. In addition, the price-performance ratio and global customer support at Kontron fit the bill. “Kontron is always a step ahead of its competitors when it comes to technology, and it always works with the latest Intel processor technologies, which naturally benefits us as customers when it comes to speed and energy efficiency,” the robot specialist says in praise of Kontron.

Kontron’s COM Express makes a significant contribution to the ROCU-7’s flexibility and broadly diversified deployment scenario, because it supports widespread commercial standards and also industrial standards. This makes it possible to use the controller in this especially critical setting. As a result, the systems keep working even when subjected to extreme temperature fluctuations and challenging environmental conditions such as extreme weather, severe dust formation or almost impassable terrain.

Due to its flexibility, an operator can control various unmanned systems with just one of the rugged handhelds from the ROCU-7 series, no matter whether the device is a terrestrial robot, an unmanned aerial vehicle (drone) or a system for use in water. The Windows-based handheld allows continuous control of all the units that are connected. This includes operation of the unmanned robot as well as control of its tactical mission. The rugged controller works with Windows 7 and has numerous standardized interfaces to various solutions. It is possible to control the entire mission management and carry out diverse independent actions.

For even more convenient usability, Roboteam equipped its rugged controller with a number of control elements. This includes joysticks, in addition to rugged switches that can also be operated with gloves. The unmanned units can consequently be precisely controlled and positioned at the site with pinpoint accuracy. The open interfaces make it possible to use the intuitive platform that Roboteam developed, along with complex external systems that users may be using. The COM Express modules from Kontron support this deployment scenario because they have been specially developed for use in multi-touch display systems and consequently perfectly fulfill the specifications for the embedded solution that Roboteam was seeking for its controller. Roboteam developed the ROCU-7 control unit on the basis of military standards in order to satisfy the requirements of ground troops around the world. This allows dangerous missions to be easily coordinated and carried out from a safe distance. The solution can also be used with unmanned air and water robots, however, in order to coordinate and control critical missions in real-time.

An important factor in Roboteam’s selection of Kontron was the importance of light and compact designs for the Roboteam systems in order to simplify use in the field. The unmanned robot and ROCU-7 control unit together weigh a total of only around 16 kg. Task forces can carry the complete system on their backs across the terrain until they reach the point at which the robot has to enter the danger zone.

In the work with Kontron, Mark Vaynberg primarily appreciates the partner’s technological know-how and exemplary support. “Both in Israel and in the USA, our most important locations, we can count on Kontron’s very well-developed global sales network and very customer-oriented support at all times,” he reports on his experience. “Kontron furthermore has a clear technological edge over the competition, which guarantees that our solution is always equipped with the latest technology and is consequently always state-of-the-art.”

And what about you? How would your Iron A-Team look like?